this past summer, my dad told me that he and my mom would be coming to boston for a meeting he had to attend, and he asked me if i would like to come with them... of course, i quickly agreed to the trip! boston has always been a place that i've wanted to visit, so i jumped at the opportunity to come. here's an update on our trip:

day one, wednesday:
mom and i had to catch a flight at 6:20 am, which made for a very early day. mom woke up at 3:20... which meant, i woke up then as well. after sleeping for most of the plane ride, we arrived at our hotel, the marriott in copley park. since dad flew in from corpus christi, he didn't arrive until around 2:00 pm... so we took advantage of the time in the room to catch up on some more sleep. the first "touristy" thing that we did was grab dinner at cheers, which is the restaurant that inspired the television show, cheers. after dinner, my parents had to go to a reception for the convention dad was attending, so i opted to hang in the hotel room and be lazy. 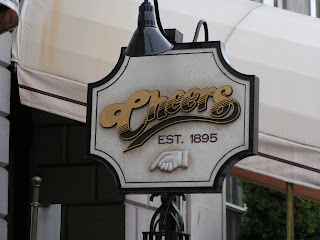 day two, thursday:
our second day started with brunch at a local tearoom called, tealuxe. both of my parents love hot tea, so it was a necessity to make sure we visited this local favorite. after lunch, we jumped onto the subway to visit harvard, which is one place that i have always wanted to see. when i was looking into masters programs, i had considered applying to harvard's divinity (theology) school, but had opted for a more conservative program, as well as a school a little cheaper and closer to home. it was great being able to walk on a campus that has been around since 1636. after harvard... and heading back to the hotel for a nap, we ate a great seafood dinner at legal seafood, where the slogan is, "if it's not fresh, it's not legal." 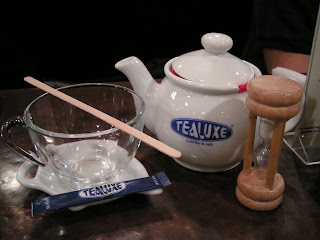 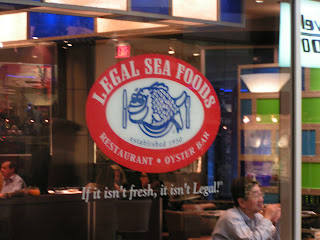 day three, friday:
our day started with an early lunch at the pour house, where i had fish and chips and some amazing homemade mac-n-cheese. after the great meal, we toured fenway park, the home of the boston red sox. my dad raised me to be an avid sports fan, particularly baseball... so seeing such a historical ball field was quite exciting to me...we were able to stand on the green monster, see the original stadium chairs, and see where babe ruth and many other greats played. once again, we made time for afternoon naps and then we "fell into the gap" and went clothes shopping (i got a great deal on a coat... hopefully it will be cold enough for you'll see me wearing it soon). after shopping, we went and had an amazing italian dinner at papa razzi's (the last picture in this section is one of the dining room at the restaurant), and then settled into the hotel room to watch the red soxs play the cleveland indians for the first game of the american league champion series. go red sox (who won the game, by the way)!! 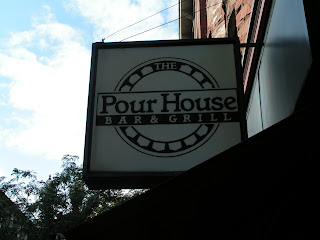 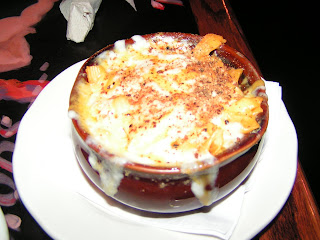 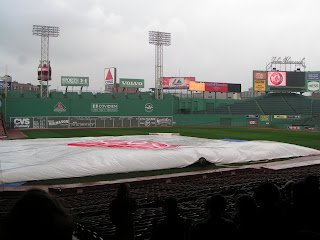 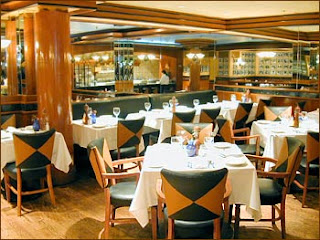 day four, saturday:
This was our last day, so we decided to make the most of it. my mom wanted to go and see some art galleries and shop, while dad and i decided to go and "see" boston by walking the freedom trail. the freedom trail is a "red-brick walking trail that leads you to 16 nationally significant historic sites, these sites include: a unique collection of museums, churches, meeting houses, burying grounds, parks, a ship, and historic markers that tell the story of the American Revolution and beyond." check out the website, www.thefreedomtrail.org, for a map of the trail and a virtual tour of the sites. while walking the trail, dad and i made a few "extra" stops along the way. the first stop was trani, which is an ice cream store that injects ice cream into cupcakes, brownies and other fantastic treats. i'm including a picture of my chocolate cupcake, with chocolate ice cream inside, that was then covered in chocolate syrup. YUM! then after eating my dessert first, we found a little (so little that we sat at a table with two other people, who turned out to be great company so we didn't mind) italian restaurant in little italy, g'vanni's. after a great meal, we met up with my mom at faneuil hall market place for some shopping and site seeing, then we made the long trek back to our hotel. my dad estimates that we walked over 20 miles today... but we were able to see a lot of boston on foot, which was a great experience. we then finished off the night with another great seafood dinner, and game 2 between the red sox and the indians. go red sox! 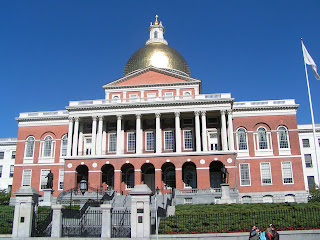 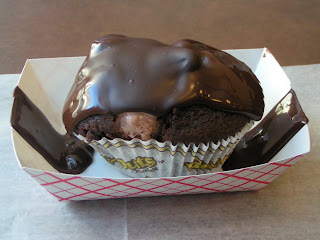 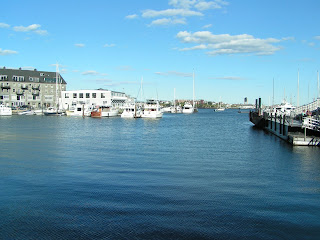 it was a great trip. i will try and put a link up to an online photo album so that you can check out all of the pictures from the trip.
Posted by Stephanie at 2:35 PM

Labels: family, things about me