a further explanation of my crazy day o' travel

so i woke up this morning. i was all packed and ready to go. my good friend susan picked me up to take me to the airport, we grabbed chick-fil- a for breakfast. she baked me cookies for my trip. the day was starting off great... and i was excited to be on my way to germany.

evidently, many flights had been canceled/delayed due to weather and delta was not prepared to handle the millions of people they had booked today. i had the privileged of encountering many of those people today. thankfully, i had checked in for my flight (to atlanta) last night, so all i needed to do was check my suitcase (which weighed 51 lbs... but i didn't get charged for the extra pound!). it took me about 45 minutes to get my 1 bag checked.

i made it quickly through security and found the gate. i sat there waiting and then happened to look at the flight info screen... and saw that my flight was delayed an hour. usually, i wouldn't be concerned by such news, but today i had 1 hour between when i was supposed to land in ATL and leave for munich. i realized that we had a little problem.

i then called the delta customer service line to see if they could get me on another airline so that i wouldn't miss my next flight. the guy was very helpful... found me a flight on american and told me all i need to do was go to the ticket counter and have a delta agent endorse the change and then hustle to another gate. while it would be tight to get there, i thought... amen, i can do that!

i soon realized when i reached the ticket counter that it was crazier than when i went through it. i found a delta employee who i observed helping people find their way through the crowd and told her my dilema. long story short, she told me that i'd have to wait in line, which would take me 1.5 hours and i was going to miss my flight. this caused me frustration because i had watched her earlier take people in similar situations straight to the front about an hour before.

so i ran back through security and to the gate to make sure i still had a seat on the plane that i was originally booked on. thankfully, i still had a seat. which was amazing because they overbooked it by at least 20 people.

i got on the plane... we landed... i missed the connecting flight by about 20 minutes.

i then had to wait in line for over 2 hours to get on a flight the next day. while in line, i was surrounded by germans. ironic?

i'm now at a holiday inn and about to head to bed. i don't have my luggage, but delta was kind enough to give me the "so sorry you got stuck" kit with a t-shirt, toiletries and laundry detergent. i found that an odd solution to my big problem, but hey, you take what you can get.

my flight leaves tomorrow at 4:20 pm. praying i have a less crazy travel day tomorrow. i'd appreciate your prayers that i am able to connect with my team (who should arrive in germany in a few hours) when i get there. someone will have to travel 2 hours to come and get me and then take me back to the resort. thankfully, they didn't seem to mind.

i'll try to update periodically throughout my trip. i'm heading to germany... hopefully.
Posted by Stephanie at 9:20 PM

Not quite germany. At a hotel in atlanta. Fly to munich tomorrow afternoon. 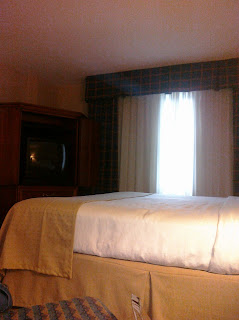 here's a quick rundown of my time in corpus:
- ate homemade key lime pie while we watched the italian job. 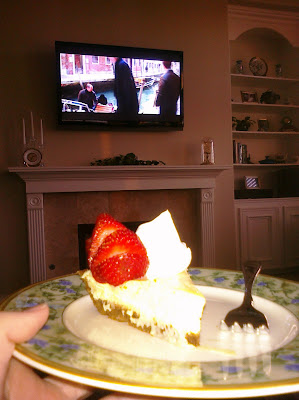 - visited the aquarium... saw some dolphins. 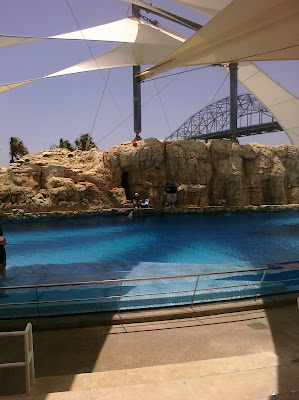 i spent lots of time with my parents and relaxed around the house. also, i decided to try out my dad's kayak, which turned out to be an adventure. long story short, i ended up in the lake covered in mud. don't worry friends, i didn't give up, i got back in for round two.
my time at home was great, just not long enough.
Posted by Stephanie at 8:36 PM

Labels: family, things about me

brings a whole new meeting to the term "wedding party!"

i found this video on facebook today. i laughed hard and enjoyed it. my mom told me i'm not allowed to steal their idea. it totally brings a whole new meeting to the "wedding party!"
Posted by Stephanie at 8:13 PM

i need a vacation

it has been a crazy week. a week filled with unexpected events. a week full of change. these changes have worn me out and it's time for a vacation.
last night i was able to fly to corpus to spend some time with my parents. my dad picked me up from the airport and we met my mom at a seafood restaurant (waterstreet) in downtown corpus for dinner. the food was amazing. here's a picture of my bacon wrapped stuffed shrimp... i didn't get a picture of the seafood-stuffed quesadillas, but they were equally amazing! if you know me, you know that i'm kind of a foodie... so the food was a great way to start my vacation! 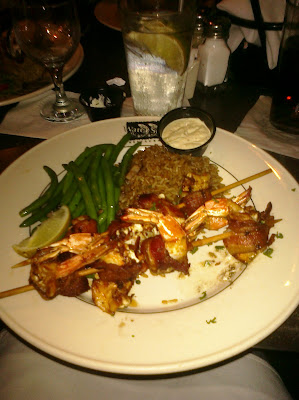 i'm not sure what today holds, but i foresee a nap in my future. i do know that i'll be picking up my dad for lunch. we're going to chick-fil-a so that he can try the new chick-fil-a sauce, he's a little behind the times. so i must do what any good daughter would do... and introduce him! should be fun. i'm sure i'll post more later.
Posted by Stephanie at 8:55 AM

Labels: things about me 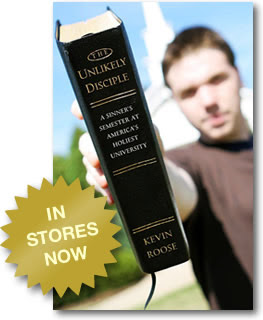 currently, i am reading "the unlikely disciple" by kevin roose.
here's some info about the book from kevin roose's website:
the question: What would happen if a student at one of America’s most secular colleges spent a semester at Reverend Jerry Falwell’s “Bible Boot Camp” for young evangelicals?

Hoping to connect with his conservative Christian peers, Roose leaps across the God Divide and embeds himself among Liberty’s 10,000 undergraduates, who call themselves “Champions for Christ.” At Liberty, he sings in Rev. Falwell’s church choir, takes classes like Evangelism 101, and makes surprising discoveries about the true nature of America’s culture war.

The chronicle of Roose’s journey is timely, hilarious, and thought-provoking, and will inspire and entertain believers and non-believers alike.

-----
i wasn't sure what i was getting myself into when i picked up the book. i am about 1/3 of the way through... and honestly, it's been a great read. as a college minister on a very liberal campus, i am always interested in what non-believer students think about us believers. when i heard that there was a book written about that exact topic, i ran out and bought it that day.
his writing is witty, honest and real, and the book is an enjoyable read. i'll try to do a book review when i'm finished with it. at this moment, i'd say that i'd recommend it. we'll see if that changes as i progress through it.
Posted by Stephanie at 7:09 PM

(if you don't know the song that inspired this blog title... click here and enjoy "all i want" by joni mitchell.)
i leave on wednesday and will be gone for about a week an a half. here's a map of my travels: 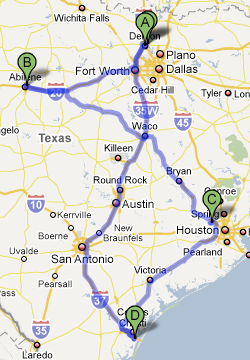 here's my schedule:
wednesday, 7/15 - drive from denton to abilene for super summer.
friday, 7/17 - drive from abilene to houston to spend the weekend with my friends, melanie and richard.
sunday, 7/19 - drive from houston to corpus christi for my vacation. i'll be spending the week with my parents.
saturday, 7/25 - drive from corpus back home to denton.
i'll cover over 1200 miles during this road trip. should be fun.
Posted by Stephanie at 6:46 PM

Labels: family, friends, things about me

a random phone call... means i need my passport 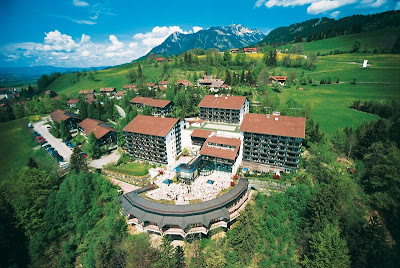 where is here you ask? bavaria, germany. august 1-8th, the entire Western Europe IMB missionary force will be meeting for a week of encouragement and training.
this past thursday night, i received a phone call from some friends asking me if I'd like to go with them and lead worship for the youth. the team that was originally going to lead the youth part of the conference ended up not being able to go... so my friends put together a team in just a few short week... which is how i got involved.
after having some conversations with the BSM bosses... everything was a go. i fly out on friday, july 31st and fly back on august 7th. i'd appreciate your prayers as we prepare to go and serve.
Posted by Stephanie at 11:19 AM